Social Media is Redefining the Experience of New Motherhood—But Is That a Good Thing? 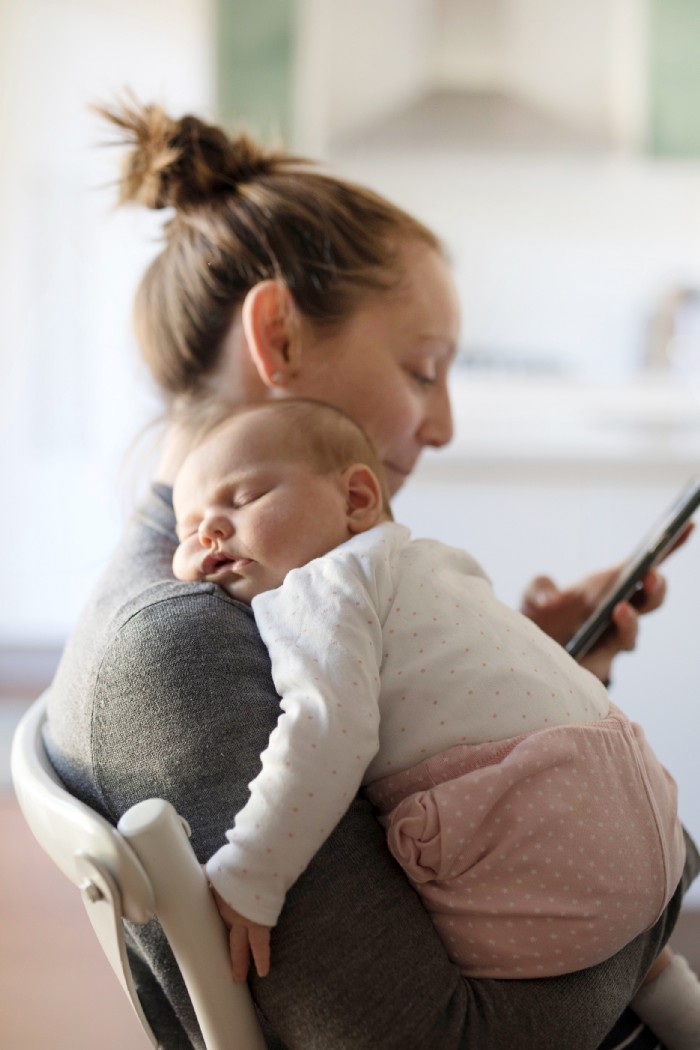 In the early days of new motherhood, it became a reflex to me: During any chance I had to sit down on the couch, I would open up Instagram and begin scrolling. As my own world felt largely restricted to the walls of my home — or the reaches of the park, the grocery store or a playdate, on a good day — I was hungry to see what was happening in the lives of other moms.

And right there in thumb-swiping distance were depictions of everything I was eager to have in my own life: carefree vacations, dates with partners and kids who were seemingly always healthy, always easy-going and alwayswilling to smile for the camera.

Depending on the course of the day and my mood, these images and captions would cause me to feel anything from hope that the newborn haze looming over my life would give way or despair from the nagging thought these other moms were simply getting something lost to me.

For me, and many other moms I know, Facebook or Instagram served as important lifelines as we were tossed into the unfamiliar seas of parenthood. These platforms — both on the macro level of newsfeeds and the micro level of ultra-specific support groups — offer connections that can otherwise feel glaringly absent during the transition. They even provide plentiful resources with other moms willing to share from their experiences, which can be a nice reminder when you wonder if your baby is the only one who’s ever had a particular challenge.

The only catch is, to use a phrase that came up in multiple conversations I had with other moms, social media is a double-edged sword that can also make you feel cut down or lesser than. But rather than just accepting this as it is, we’re being the change we want to see by striving for truer connections, sharing more authentic glimpses into our lives and reclaiming the experience of social media in motherhood.

Social media takes on a new role for new parents

For many of today’s new parents, social media is a native language. It simply has been part of our lives, in some form, for so many years that we are just as comfortable (if not more) posting a question or sending a message through Facebook than we are with putting ourselves out there in such a way in real life.

What happens when the interactions we’ve been balancing internet usage with fade away — or are replaced by 24/7 interactions with an unspeaking baby? According to a 2012 study published in the journal Family Relations, 44% of women increased Facebook use upon becoming mothers.

Among these new mothers, the desire for continued social connection was one of the driving forces for regularly signing on — despite them reporting they didn’t communicate with 88% of their Facebook friends outside of the virtual world.

The trend only continued in the following years, as a 2018 study on “Social Media as Social Support in Pregnancy and Postpartum” found that 84% of new mothers considered their social media friends to be a form of social connection.

To a real extent, it can be: If you’re the first of your immediate friend group to have a baby or are dealing with a seemingly unique dilemma, social media can help pave the way to new, genuine friendships and can provide the human touch that is lacking from midnight Google searches.

However, you don’t need to spend much time in many mom-oriented Facebook groups or Instagram hashtags to see there is a darker side to social media, too. Beyond the places where judgment and shaming seem to, sadly, run rampant, there is also the nearly inevitable instinct to draw comparisons between our personal lives and the ones that play out through meticulously selected filters.

In fact, the 2012 Family Relations study found more Facebook activity was associated with higher levels of parenting stress. That was backed up by a 2017 study in the journal Computers in Human Behavior that found drawing comparisons to other families through social media was related to more co-parenting conflicts and higher levels of maternal depression.

The brilliant thing about social media is that, ultimately, we are the ones in control of our experiences. After what felt like a surge of backlash against perfectly curated depictions of life and motherhood, there has recently been a trend toward vulnerable, authentic and relatable posts.

More than just a casual observation, this is something millennials expressed wanting to see — with a 2017 Consumer Content Report finding 90% of millennials preferred “real and organic” social media posts over those that were “perfect and packaged.” This, in turn, opens the door to more meaningful communication.

One mom I knew in person more than a decade ago but have since reconnected with over the shared experience of motherhood, told me authentic posts are her favorite aspect of social media. She says, “Seeing that [other moms] have issues and triumphs similar to mine make me feel like I’m not alone, which is nice.”

The mindset with which we approach time on social media can make all the difference, too. As another mom told me, “When I suffered from postpartum anxiety, [social media] made me feel like I wasn’t doing it the right way.” Now that she’s on the other side of the postpartum anxiety, however, she says she is able to see that these other moms just want to share their joy.

Taking ownership and control over our social media experiences

When social media still feels like it’s doing more harm than good, is the solution to ditch it? For some people, the answer seems to be yes: According to a 2018 study from Pew Research Center, 42% of adult Facebook users have taken extended hiatuses from the platform while 26% had deleted the Facebook app from their phones within the past year.

However, for many more, the better option is to take power back into our own hands by actively seeking the connections we want and sharing the authentic posts we desire.

And it seems no coincidence that social media platforms and media brands are responding: In the past couple of years alone, Instagram Stories have provided more intimate views into friends’ lives and responses have prompted more ways to communicate. Facebook is continually pursuing ways to connect people face-to-face — even with miles between them. And, with Motherly, we’ve responded to requests for more true-to-life depictions of motherhood with community-sourced posts that have sparked some truly incredible conversations.

The gateway to a rich community of fellow moms through social media can truly be a valuable resource, says licensed marriage and family therapist Heidi McBain, author of Major Life Change: Stories of Motherhood, Hope and Healing.

“When you’re a new mom, it can be hard to leave the house to buy milk, let alone to meet up with friends,” McBain tells Motherly. “Social media can be a great place to get much needed emotional support from other moms, especially if you’re feeling lonely or isolated being at home with a new baby.”

But not all connections on social media are created equally. A “like,” although instantly gratifying, does little more than say the post was seen and appreciated. It’s in the comments or, better yet, direct messages that the best digital heart-to-hearts of my motherhood journey have unfolded — often giving a mom I knew back in elementary school and me something new to bond over. And, better yet, giving us the reminder that we aren’t alone.

As one mom friend told me about her favorite aspect of social media, “On those days I’m trapped at home, I like sharing snippets of our day and getting feedback from other moms in the ‘we’ve been there, your life is totally normal’ way.”

However, licensed master social worker Erin Barbossa cautions that these conversations — meaningful as they may be — are no true substitution for in-person interactions.

“Be mindful when your online relationships are your primary friendships,” she says. “Online feels easier in the short term, but it doesn’t have the same long-term payoff as an in-person friendship.”

Each person’s relationship with social media can — and should — vary

I now look back on those Instagram-scrolling sessions from my couch as the moments that helped me bridge the transition to motherhood until I felt confident enough to fully reemerge in the world with a baby by my side.

Honestly, I also love that I can open up the time capsule that is my Instagram feed and be instantly transported back to the moments when my son was messily trying solid food for the first time or when we were cheering as he learned to crawl. But, oh, how quickly the mind can forget the lows that can accompany those highs. When you’re in the midst of it, it can be challenging to get the impression through social media that other moms are managing everything better.

Even now, there are days when I realize how mindlessly I’ve been scrolling through Instagram or liking pictures on Facebook — during times that could be better spent asking a friend if they want to meet up for a playdate or coffee break.

That’s where I have been recently, back on the ol’ social media crutch. So I did something radical, at least for me: I deleted all the social media apps from my phone for an undetermined period of time. And, you know what? Instagram and Facebook will be there, patiently waiting, when I’m ready to return. Under neglect, the same can’t be said for the real people in my real life.